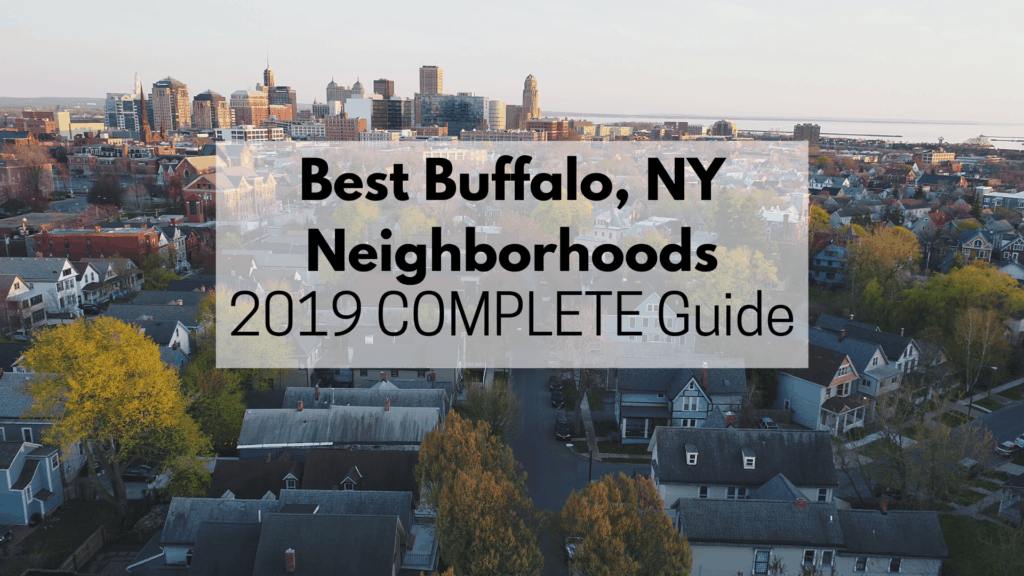 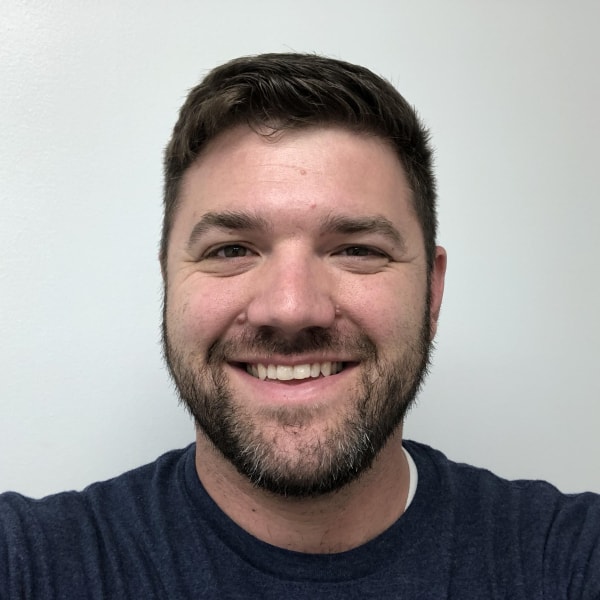 Once a booming manufacturing and trade center home to more millionaires than anywhere else in the country, Buffalo today is the City of Good Neighbors with a diverse population, amazing food, exciting cultural events, and a fun nightlife. It’s one of the most affordable places to live in the U.S. and, despite its tough winters, consistently ranks well for its infrastructure and amenities.

When you’re ready to move to Buffalo, your first step will probably be narrowing down your options to choose the best neighborhoods in Buffalo to call home. This gorgeous city on the shores of Lake Erie covers more than 52 square miles with 32 distinct neighborhoods, each with something unique to offer. Choosing the right one means carefully considering what you’re looking for and the type of lifestyle that will suit you. Do you want the best neighborhood for families? What about the most affordable neighborhood? Is walkability a priority?

Elmwood Village is often named one of the best neighborhoods in Buffalo, NY thanks to its unique pedestrian-oriented design. Elmwood Village is a beautiful mixed-use neighborhood that boasts hundreds of open-air cafes, farmer’s markets, locally owned boutiques, and restaurants you’ll have fun exploring on foot.

Elmwood Village isn’t just the place to be for shopping and dining; it’s also a cultural center of Buffalo with the Burchfield Penney Art Center’s collection of regional art and the Albright-Knox Art Gallery with Warhol, Dali, and Van Gogh on display. 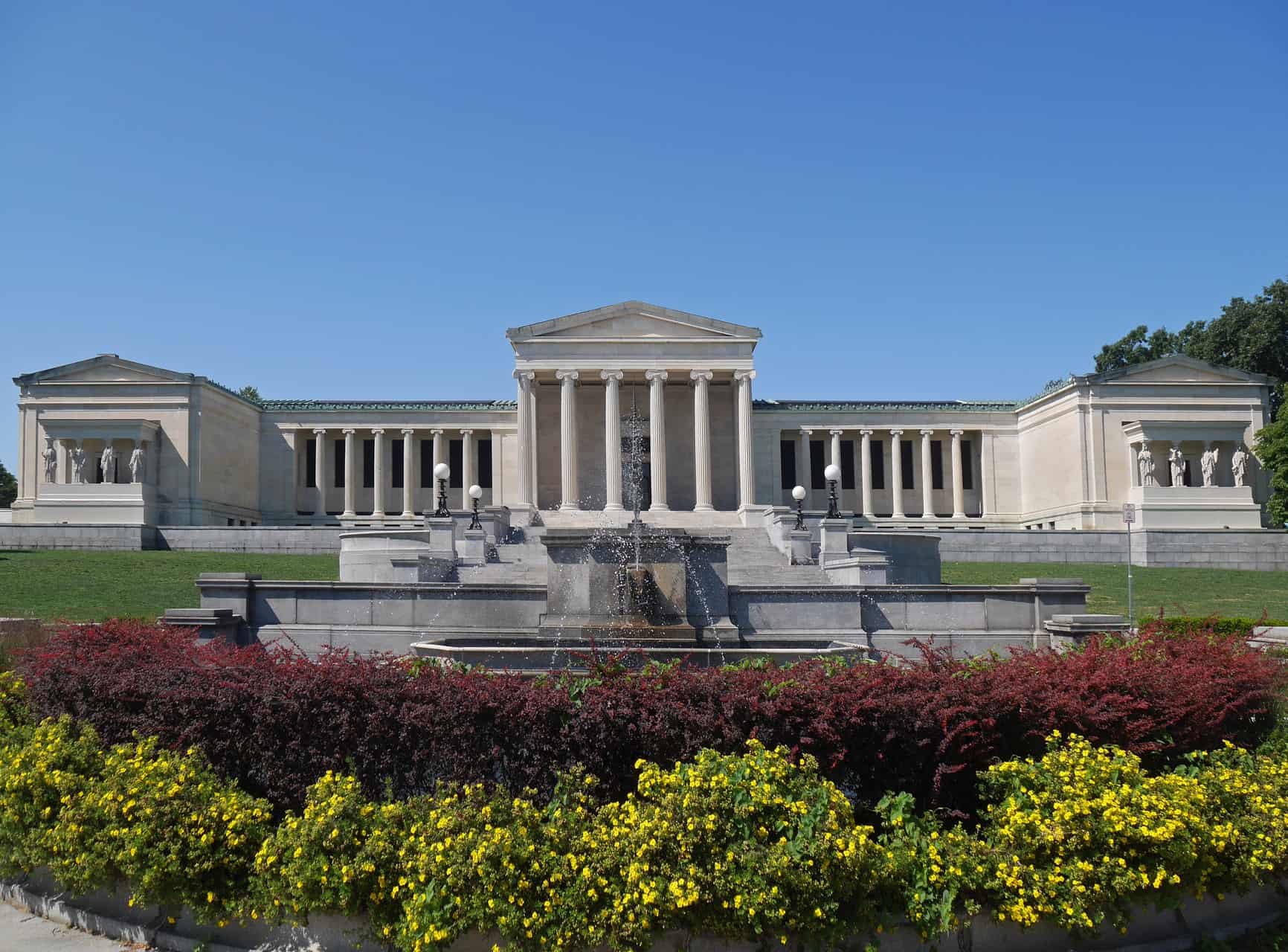 Want to see what Elmwood Village is all about? Try taking a walk or jog from Marcy Casino in neighboring Delaware Park around Hoyt Lake and continue down Lincoln Parkway to Bidwell Parkway, once the most prestigious area in Buffalo.

Looking for the best gay neighborhood in Buffalo? You’ve found it in Allentown which is often named as one of the best gay friendly neighborhoods in the entire country. This historic Buffalo suburb is home to a large population of LGBT residents and bohemians near the entertainment and theater district.

Allentown has a creative energy you just won’t find anywhere else in Buffalo, NY with gorgeous brick buildings, brightly colored Victorian homes, and murals on seemingly ever bar and gallery.

The median household income in Albright is $77,300 which makes it the wealthiest suburb in Buffalo, NY. This beautiful neighborhood along Hoyt Lake also has a median home value of $293,000, far above the Buffalo median of $160,000.

Albright may be small with a population of around 3,000, but it’s surrounded by great amenities and stunning homes. Visit the historic Albright-Knox Art Gallery to take in their large collection of contemporary and modern art then get away from the hustle and bustle of daily life at the lake. The path around Hoyt Lake was designed for quiet contemplation of nature as the city vanishes from sight amid the willow trees and wildflowers. It’s sure to be your new favorite place for walking your dog or just getting away from the city noise for an hour or two. 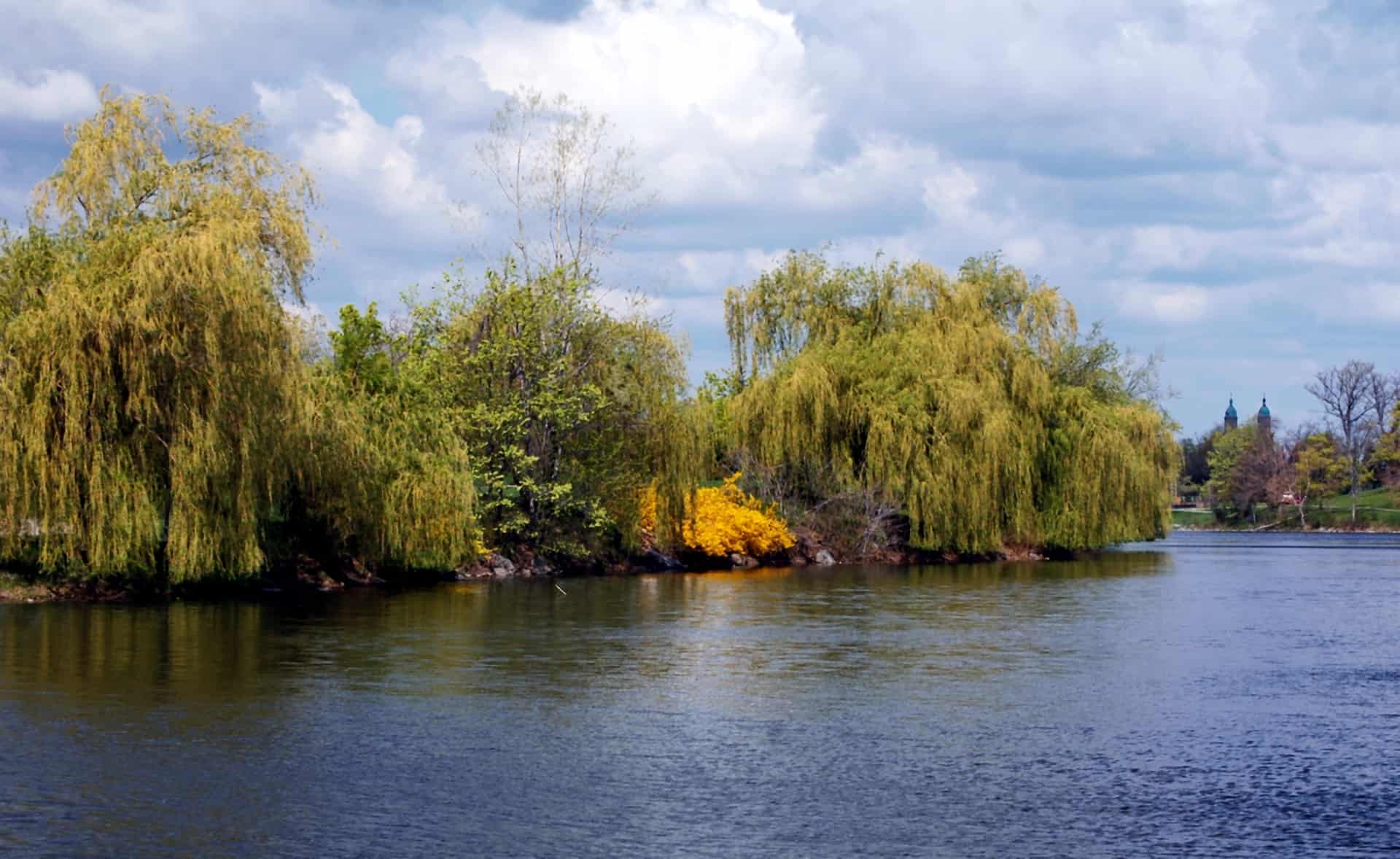 Looking for the best neighborhoods in Buffalo for families? The Central Park Buffalo suburb has everything you’re looking for. It’s one of the Buffalo neighborhoods with the best schools plus a low crime rate and plenty of nearby amenities.

Unlike some areas of Buffalo, Central Park has retained its unique charm and character over the years, despite development. The Central Park neighborhood is close to Hertel Avenue amenities, Delaware Park, and the Buffalo Zoo and very walkable. Curious about your neighbors? The community is mostly filled with families and young professionals with a high homeownership rate and an educated population where 39% of people have at least a bachelor’s degree.

Downtown – Best Neighborhood to Be Close to the Action

Don’t like the idea of suburban living with a yard to maintain? Downtown Buffalo is where all the action happens and it’s the perfect neighborhood for hanging out with friends, grab a bite to eat, and take part in events.

Living in Downtown Buffalo, you can enjoy a dense urban environment close to bars, restaurants, shops, and parks. This lakefront neighborhood is dominated by young professionals, but there’s also a lot of families thanks to affordable rent prices, diversity, and several A-rated schools like Leonardo da Vinci High School and P.S. 195 – City Honors School. 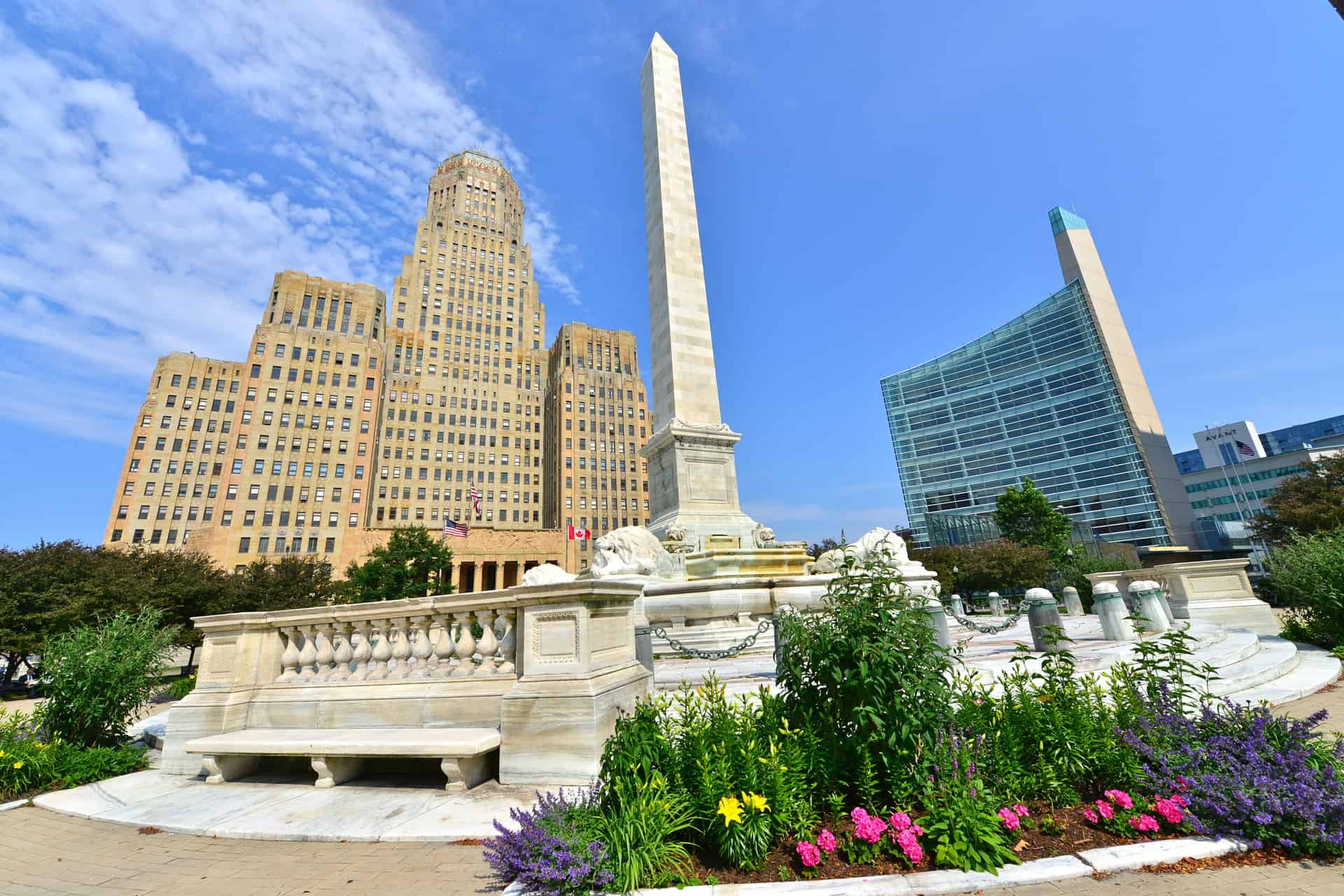 How do you see life in Downtown Buffalo? You may spend an afternoon exploring the district’s Art Deco towers like the beautiful City Hall and the Market Arcade. This historic property, built in 1892, has a boutique-filled atrium and food court with plenty of craft breweries to explore just outside. At Shea’s Performing Arts Center, a renovated 1926 movie house, take in Broadway shows or head to KeyBank Center to catch the latest big act in concert.

Which Buffalo neighborhoods are the best when affordability matters? South Buffalo tops the list as one of the best places to live in Buffalo, NY without spending all of your budget on housing. The median home value in South Buffalo is just $130,000 and rent is just $667 on average. More than 38,000 people call South Buffalo home which also makes it one of the city’s largest suburbs.

South Buffalo isn’t just affordable; it’s the heart of the historic Irish community in Buffalo that dates back more than two centuries. It’s also home to a more subdued nightlife with late-night watering holes and Irish pubs, including Swannie House and Ulrich’s Tavern, the two oldest taverns in Buffalo. As a resident, you’ll love taking part in the frequent Irish events and festivals that start at the Buffalo Irish Center. Along with a huge St. Patrick’s Day bash, the Center hosts a Halfway to St. Patrick’s Day celebration in September and the South Buffalo Irish Feis with music and dancing.

As you can see, Buffalo has a lot going on with amazing places to live no matter your lifestyle, budget, and needs. The only challenge you will face now is deciding what area of the city is right for you! From hip downtown rentals and cultural centers like Elmwood Village to laid-back suburbs like South Buffalo, the city really is well-suited to everyone.

Once you’re ready to make a move to Buffalo and the neighborhood of your dreams, our top-rated movers at Wayfinder Moving can help you get started. Call today at (716) 832-6683 or complete our Request a Quote form to get a free moving estimate from your friendly local movers. 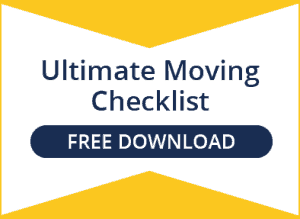 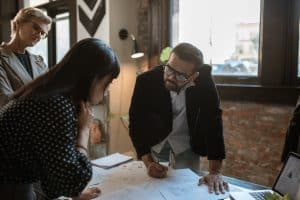 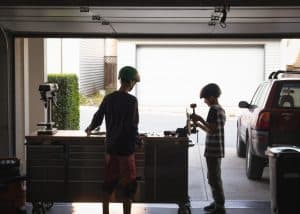 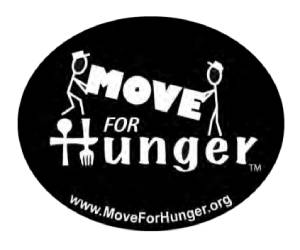